I go around to my sister Ruth’s, I call her Ruthie place on most Tuesdays for family connection. It comes out of a practice we used to do of taking our dear mum who passed at the end of 2017 op shopping, think thrift shops for the US nearly every Tuesday for seven years. She advised me that she had visited St. Arnaud, one of the towns we sent 4 years during our childhood. This was 50 years ago, and for some inexplicable reason, I remembered it used to be called The New Bendigo goldfields and that the only remaining item of that name was a derelict cemetery 10 km outside town on the Donald road. Mind you, I have not been there for 30 plus years. I am such a research nerd, no fact, however small leaves my grey matter.

We began talking about our memories of the place, our friends’ names, the local pool and then for some reason I moved onto the mistakes I had made. This is not a complete list, but here goes: 1. Setting the lounge room chimney on fire so that the Fire Brigade had to be called to put it out. 2. Setting the paddock behind our house on fire with matches and lying about it, yes the fire brigade had to come again, who’s the closet pyromaniac. 3. Sinking the other rafts in the Scout regatta by putting holes in their drums with a hammer and nail punch, we were quite inventive with this, I don’t know how we weren’t thrown out. My sister asked me why would you do things like that, I have contemplated it and come up with the devil in me was looking for an escape clause.

What do mistakes cost us and how has society looked at it, here we go:

1. I have never lit a fire again in my life, I say I am terrible at it.

2. The pyromaniac in me needed a couple of lessons: Firestarter.

3. I have come to the realisation that mistakes are just our shadow side talking to us, sometimes in funny ways. 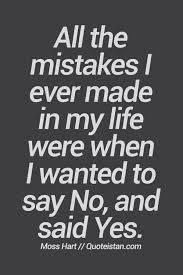 4. This appealed to the People Pleaser in me: U Can’t Touch This. 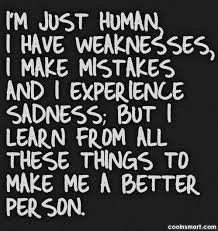 5. Mistakes are definitely an essential part of our formative education. 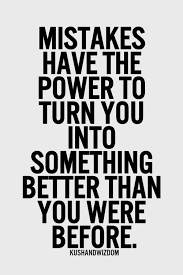 7. Regarding the fire stuff,  luckily, both of my parents were loving and understanding. 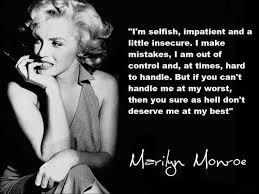 9. By the greatest quoter, Ms Unknown, but a beauty.

11. Sofia Villani Scicolone, Dame of the Grand Cross, OMRI  born 20 September 1934), known professionally as Sophia Loren is an Italian film actress and singer. She is one of the last surviving stars from the Golden Age of Hollywood. Encouraged to enrol in acting lessons after entering a beauty pageant, Loren began her film career at age 16 in 1950. She appeared in several bit parts and minor roles in the early part of the decade until her five-picture contract with Paramount in 1956 launched her international career. Notable film appearances around this time include The Pride and the Passion, Houseboat, and It Started in Naples.

Her talents as an actress were not recognised until her performance as Cesira in Vittorio De Sica’s Two Women; Loren’s performance earned her the Academy Award for Best Actress in 1962 and made her the first actress to win an Oscar for a foreign-language performance. She holds the record for having earned six David di Donatello Awards for Best Actress: Two Women; Yesterday, Today and Tomorrow; Marriage Italian Style (for which she was nominated for a second Oscar); Sunflower; The Voyage; and A Special Day. After starting a family in the early 1970s, Loren chose to make only occasional film appearances. In later years, she has appeared in American films such as Grumpier Old Men (1995) and Nine (2009).

13. If you have people around you who do this, time to say goodbye to them.

15. From this list comes the message, your job is to learn.

Did I stop making mistakes after we moved from St. Arnaud nee New Bendigo, FUCK NO!! I am 64 and am sure I still have several hundred to go, but they all will be part of the beautiful journey we call life.

The playlist rocks tonight. The Prodigy smashes you First, Two rap icons in MC Hammer and Coolio follow next, then a throwback with a tune by Marilyn Monroe. Amy Winehouse follows with the penultimate piece being the spoken word by Bruce Lee, in Chinese with subtitles. We finish with more rap from Little Wayne and Bruno Mars. Enjoy, I did creating it: We Don’t Make Mistakes, Just Happy Little Accidents.

So mistakes, all the more reason we need to embrace my world paradigm, Love and Respect for All, Everybody Included. Until Next time, my dear friends.