I was going through my books as part of my decluttering process when I came across Destroying the Joint – Why Women have to change the World. I bought it off my friend Catherine Deveny, who has a contribution to it called Destroying the joint in Twelve Easy Lessons. The stamp inside of it says stolen from the bedside table of Tony Abbott, He is Australia’s ex-prime minister who declared himself Minister for Women, a strange role for an extreme right wing bully boy, he has since been sacked by his party from both roles and wallows on the back bench.

Lesson number one begins as follows: Beware of anyone using the words ‘respect’ ‘traditional’, ‘family value’, ‘honour’, ‘unacceptable’, ‘morality’, ‘uncalled for’, ‘inappropriate’, ‘unnecessary’ or ‘offensive’. and to be particularly wary of the word offensive as offence is subjective. Catherine goes on to say just because you are offended does not mean you are right and that it is being used as a form of social control and that no one has the right not to be offended.

So I had to choose carefully today’s quotes as I did not want to offend anyone, just kidding, here we go:

1. Bryant McGill is a human potential thought leader, international bestselling author, activist, and social entrepreneur. He is one of the world’s top social media influencers reaching a billion people a year. Don’t look over there at the other person if you are offended.

2. Could being offended also be construed as speaking your truth, give it a go: Ain’t Worried about Nothin. 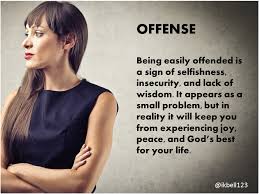 3. The judgement of being offended, time for a judgement detox methinks.

4. A suggestion, lock your doors and never leave your cloistered premises: Offended by Everything.

5. Deep wisdom from an unexpercted source, Bill was a baseball player for the Cincinatti Reds.

6. With the light comes the dark, doing only one of them make it hard to speak your truth: Addicted.

7. An  interesting quote from a highly religious man. David Bednar is on the quorum of the Church of Latter Day Saints, a place we could expect a lot of people to make judgements about non christian values.

8. They are located reading mainstream media and the opinions spruiked from its tenuous publications and stations: Equal Rights.

9. In 1995 Lebowitz wrote Mr. Chas and Lisa Sue Meet the Pandas, a children’s book about giant pandas living in New York City who long to move to Paris. Lebowitz was born and raised in Morristown, New Jersey. Lebowitz describes her “Jewish identity [as] ethnic or cultural or whatever people call it now. But it’s not religious.” She has been an atheist since the age of 7.

10. Time to look in the mirror for the person who is doing the offending: Ego is not a dirty Word.

11. Imagine a world if everyone spoke the ones they keep to themselves. Vulnerability or madness? 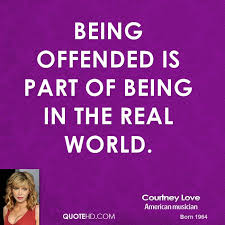 12. Her 15 minutes of fame were being married to Kurt Cobain, she has also had a 40 year musical career best known for the alternative band, Hole: Uncool.

13. If you saw the number of goatee beards in the area I live in the inner suburbs of Melbourne, Australia you would be quite worried about the above statement. 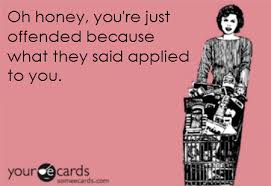 15. Carlos Castaneda’s books and the man himself became a cultural phenomenon.  The story of his apprenticeship to a shaman, a kind of hero’s journey, touched a chord in the counterculture generation and resonated as a myth of adventure and self-discovery.

The reason  offended people use offense to put you in your place is in order to fortify their place, the truth being neither have greater value than the  other, they are after all just our opinions. The skill one should bring into place here is the ability to not live your life from judgement moment to moment, a life long educative journey.

Namaste until next time, my dear friends

27,249 spam blocked by Akismet
a change in time