I am currently reading Stan Grant’s book, Talking to my Country, an indigenous reporter who gave a remarkable speech about how his people had been treated for the 200 years of white occupation : The speech. It tells his story growing up black in white Australia, a country which did not count their indigenous as humans beings ILO flora and fauna until 27 May, 1967, it is a powerful read.

So how do we hold country around the world, I have selected some quotes from the new residents and the indigenous residents of the lands that make up the earth, lets go for a wander: 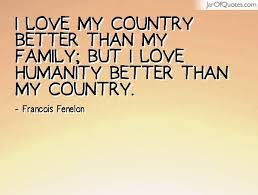 1. François Fenelon  (6 August 1651 – 7 January 1715), was a French Roman Catholic archbishop, theologian, poet and writer. His best knowing writing is : A people is no less a member of the human race, which is society as a whole, than a family is a member of a particular nation. Each individual owes incomparably more to the human race, which is the great fatherland, than to the particular country in which he was born. As a family is to the nation, so is the nation to the universal commonweal; wherefore it is infinitely more harmful for nation to wrong nation, than for family to wrong family. To abandon the sentiment of humanity is not merely to renounce civilization and to relapse into barbarism, it is to share in the blindness of the most brutish brigands and savages; it is to be a man no longer, but a cannibal.”

2. Whilst I am not a great supporter of Religious and Political orders, I like the choice of doing good as the ethics of his religion : Losing my Religion.

3. “Nationalism is an infantile disease. It is the measles of mankind.” Albert’s take on it. What will the world make of white nationalists being appointed to the Trump administration. 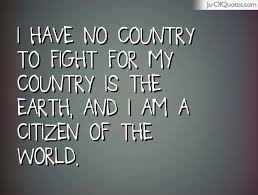 4. I was a year off being a draft dodger because I was definitely not going to Vietnam to serve Queen and Country: War, What is it good for?

5. Captain Jack has the privilege to be able to point out the not so good sides of his country and be listened to.

6. An icon of the protest movement worldwide, he believed that land was for everyone: This Land.

7. William Lloyd Garrison (December 12, 1805 – May 24, 1879) was a prominent American abolitionist, journalist, suffragist, and social reformer. He is best known as the editor of the abolitionist newspaper The Liberator, which he founded with Isaac Knapp in 1831 and published in Massachusetts until slavery was abolished by Constitutional amendment after the American Civil War. He was one of the founders of the American Anti-Slavery Society. He promoted “immediate emancipation” of slaves in the United States. In the 1870s, Garrison became a prominent voice for the woman suffrage movement. Back in that time he lived that his countrymen were mankind.

8. For the love of freedom for his country, Gandhi taught his countries citizens the ethos of non violence, a feat that has not been repeated in the history of mankind at the cost of millions of humans : Gandhi Jayati Special song.

9. A fact that most governments forget, that they are not the land of the country.

10. Love and Respect for All, Everyone Included: Already Home, Already Free.

11. Stan talks about his people’s attachment to the land, they do not own it , they belong to it.

12. The beautiful music of Xavier Rudd, I honour that place he talks about his music coming from: Spirit Bird. 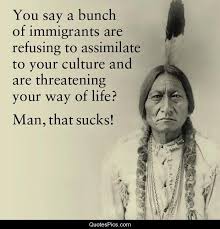 13. The so-called winner gets to write history, how much is fact?

14. When your tribe is humankind, and you do this, the planet and the land will have a chance: Stand By Me.

15. Mainstream media has a lot to do with the resurgence of people of this ilk being elected as representatives in Governments. Look up Pauline Hanson’s One Nation Party, she can’t spell white supremacist. By the way this was years ago. She was wrong about the Asians, it has now become the Muslims.

So do you live on your land or in a country. Are you Australian, American ot part of the human race? We need a transformation to the latter for the killing to stop and see the rise of humanity.